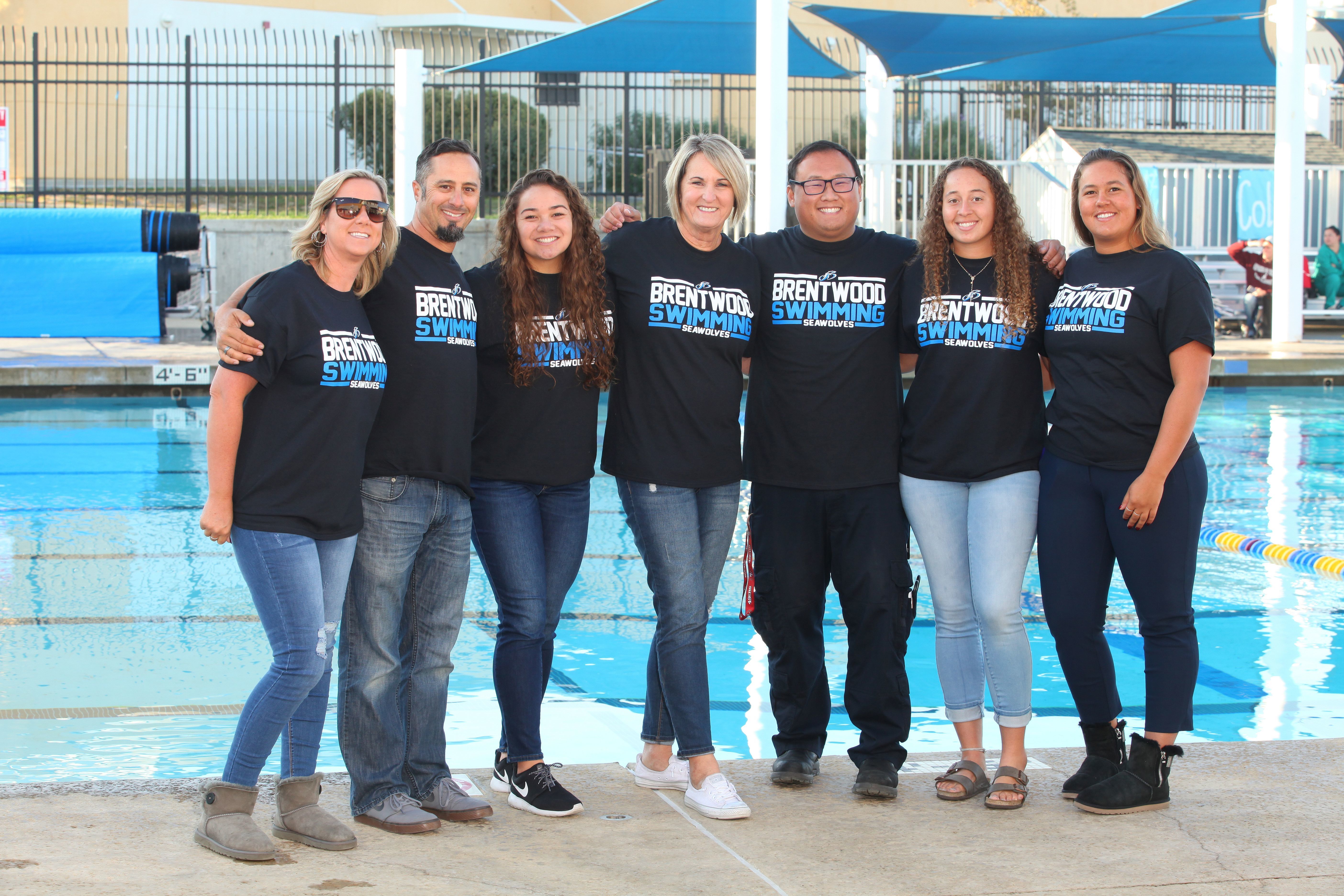 Image
Upload and embed an image

We are here to support your needs. Communication between the parents and coaches is important to us. Provided below are the email addresses for each of our coaches. It is preferred that parents use this method for communication instead of during practices, when coaches need to focus on their swimmers.

If your questions are related to workouts, meets, events, goal setting, and other swimming related needs, please contact us.

For any questions related to administrative items, such as dues, safety, or policy issues, please use this link to Contact Us. 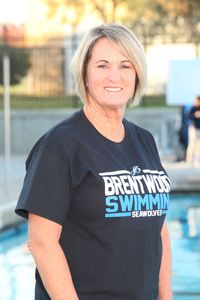 Coach Pam has been with the SeaWolves since 2008 and with more than 25 years coaching experience, she has coached all levels of swimmers. She previously coached for the Concord Terrapins and the Brentwood Dolphins.

She has coached many athletes that have participated at the National level and multiple swimmers that have competed and placed at Junior Olympics and Far Westerns. She has also coached high school swimming at Freedom, Liberty and Heritage High School.

Pam is our head age group coach, and she coaches our Silver group which consists of many high-level age group swimmers.

She has shared her love for swimming and coaching with her family, and as such, both of her children swam and played water polo for years and became coaches as adults.

Pam has a passion for swimming and she enjoys passing on the love of it to all the BSW team members. 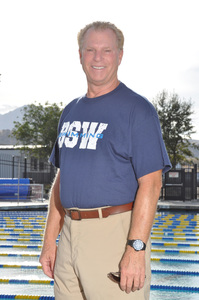 Coach Carson became head coach of the Brentwood SeaWolves during the summer of 2010, bringing over 40 years of coaching experience to the program. The SeaWolves have had tremendous success during the past 10 years. BSW has gone from no senior program in 2010, to a 6th place finish in 2016 at the California/Nevada Senior Sectional Championships. The Senior team has had individual qualifiers reach Senior Western Zones, the Arena Pro Series, the Futures Championships, U.S. Jr. Nationals, US Open Nationals and the U.S. Olympic Trials in 2016 and 2020.

At the high school level, Coach Carson has worked with dozens of NISCA All-Americans while winning boys and girls league championships at four different high schools. His teams have finished in the top 10 at the North Coast CIF Championships more than a dozen times. In 2017 he was awarded an an Honor Coach for leadership in the sport of swimming for the CIF North Coast Section. He was honored in 2015 with induction into the Antioch Sports Legends Hall Of Fame and in 2019 to the Liberty Union School District Sports Hall of Fame. At the collegiate level, Coach Carson was co-captain of the 1973 Chico State Division II National Championship Swimming team that was inducted into the Chico State Hall of Fame.

Craig and his wife, Paulette, own Carson Swim School in Brentwood, where they have taught over 35,000 individuals how to swim since 1985. Craig served a three- year term as a Board of Director for the United States Swim School Association (350+ swim school members) and is a member of the Champions Club (top 10% of swim schools in the U.S.). Carson Swim School has been selected by local readers of the Brentwood Press as #1 for the "Best Swimming Lessons" every year since 2003. 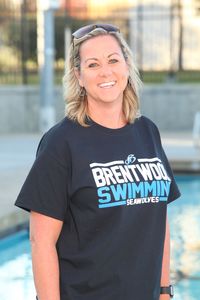 Coach Brandi currently runs the swim program at Knightsen Elementary School. She previously coached for the Discovery Bay River Otters, Oakwood Water Polo and prior to that, she coached for 6 years with the Brentwood Seawolves. She also coached the Heritage High School swim team and JV boys water polo, as well as with the Terrapins and Aquaknights.

As a coach I believe technique is the key. It doesn't matter how fast you go if you're not swimming the stroke correctly. What place you get a the end of the race is irrelevant. What matters is that you improve your time. You have to put in the hard work at practice to achieve your goals. Keeping kids motivated to continue improving themselves is something I take pride in, and I hope you'll see that reflected in your swimmer as they work with me this year! I am eager to start our season and look forward to seeing everyone on the pool deck! 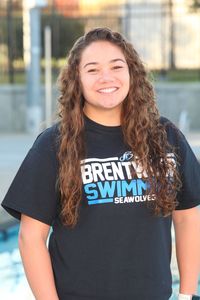 Coach Emily started swimming when she was five years old. She began swimming at Carson Swim School—where she’s spent summers teaching lessons since 2011. After swimming with a summer rec team, she joined Brentwood SeaWolves in 2010. Emily swam and graduated from Freedom High School in 2014 and went on to attend Brigham Young University where she studied Public Health. She was a member of the BYU Swim Team from 2014-2018 and loved her experience as a collegiate athlete. Now back in town, Emily is excited to return to Brentwood SeaWolves and be a part of a program and sport that has so greatly impacted and defined her life! When Emily is not coaching she loves baking, music, and spending time with family and friends. 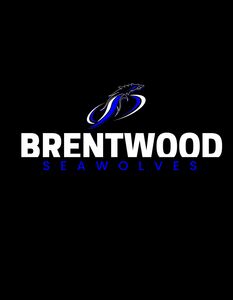 Coach Ray has been coaching for 3 years now and started swimming when he was 7 year old. Ray stopped swimming after his senior year in high school when he chose to continue his education in sports physiology and exercise science over a swimming scholarship. Ray graduated from Heritage High School, swam at CIF state championships, and was a sectional swimmer during his swim career. Although he stopped swimming competitively Ray still swims for fun. He even swam across Alcatraz. Ray believes in mastering one's body through technique, quality practices, and dedication to your sport. The 200 freestyle is his favorite event and his favorite stroke, but he was also a sprinter and swam butterfly. When he is not swimming he's either lifting weights or playing basketball. 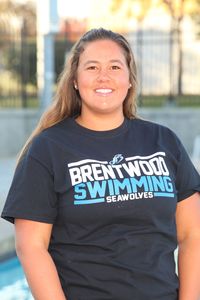 Coach Gem joined the Brentwood SeaWolves in the Fall of 2013. She has been swimming since she was 9 years old with many different teams. Gem currently attends Diablo Valley College, and swims for their swim team. She graduated from Deer Valley High School where she swam all 4 years. She was also team captain and voted most inspirational by her teammates during the past 2 years. When Gem is not coaching, she enjoys cooking and spending time with her brothers and sisters! 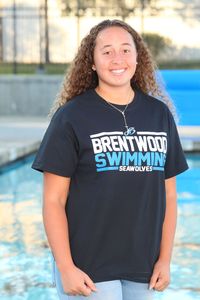 Hello! I am Sky LaBonte. I have been swimming for 15 years of my life, seven of which with the Seawolves. I was awarded a D1 scholarship to swim at Saint Peter’s University. I am now currently at DVC studying, swimming, and playing volleyball. I love being around water specifically the pool, the beach, and Lake Tahoe; I also work at Carson's swim school. I want my swimmers to enjoy and love this sport as much as I do, I will do all I can to help them achieve their goals for this sport!